The “Stand out for Life” Story

As a graduate student in 2004, I became active in prayer and loving outreach outside of abortion centers after becoming convicted of the need to love enough to do more from reading and praying with The Gospel of Matthew 25:31-46.

After graduation, working as a director of youth ministry in October 2007, a prominent pro-life leader came to town for a big pro-life youth event that our youth group helped organize. As I was sitting across the table from him at a local restaurant prior to the event, I asked him about something that had been stirring within for a while:

“Has there been any effort in the pro-life movement to provide an opportunity for pro-life people to take to the streets in peaceful protest all across the U.S. for the end of abortion?”

I shared the vision that kept coming up for me of hundreds of thousands of people in every major city all across the U.S. standing up publicly in a regular effort to effectively send a message to those in leadership positions of Church and State and change hearts and minds toward ending abortion in the process.

At the time, there were recent, regular mass protests in the U.S. for immigration reform and they were making an impact.

It seemed to me that gathering in D.C. once a year for the March for Life was not enough and that more frequent mass protests would be an important benchmark to reach in order to truly advance to the end of abortion.

The pro-life leader listened graciously and agreed, but it was clear that no real effort was being put toward providing such an opportunity for pro-life people. I knew doing anything on a national level was well beyond me, but I began considering if maybe I could do something locally.

The following year (2008) I began working for a local Catholic radio station and started doing what I could to provide opportunities for people to stand out publicly in Buffalo, NY, outside of the biggest abortion center in the city. We regularly had more than 100 people in attendance, with a max of about 130. There is a regular group that continues praying there in peaceful protest every Saturday to this day.

Nearly a decade later (2017), the vision was still stirring within, so I began again to do what I could locally to provide opportunities for people to stand out, this time where I was living in Rochester, NY, outside of the headquarters of Planned Parenthood of Central and Western NY. We called these monthly events “Stand Out for Life” and we regularly had about 200 people in attendance, with a max of about 250.

When the COVID-19 lockdown hit in March 2020, we adjusted by deciding to open up the opportunity. The event became a broadcast on local Catholic radio so people could “socially distance” and stand out in peaceful protest from anywhere while listening to the one-hour broadcast.

Fr. Stephen Imbarrato came on board as a co-host for the show and we began encouraging people via global Catholic radio and live streaming on social media to stand out for life wherever they may be.

The last episode of Stand Out for Life aired 1/23/21 and the show with Fr. Stephen Imbarrato continued on as a Friday episode every week on The Simple Truth.

I still believe that if we are truly going to get to the end of abortion, when it will be illegal in law and unthinkable in culture, we must first reach the day when large numbers of pro-life people are willing to regularly stand out publicly in peaceful, prayerful, protest to show a strong demand for ending it.

Will you be among them? Will you Stand Out for Life?

For Want of a Nail 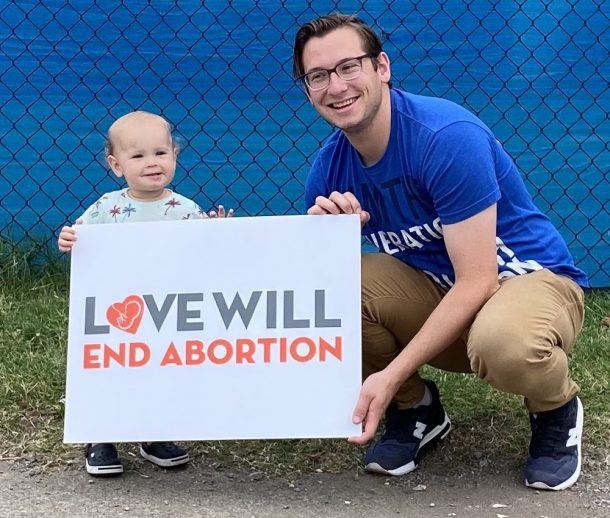 Let's be real. It can be hard to make a new habit, even when it's important. Get our friendly email updates and reminders to keep connected and follow-through on Saturday mornings!

You have Successfully Subscribed!